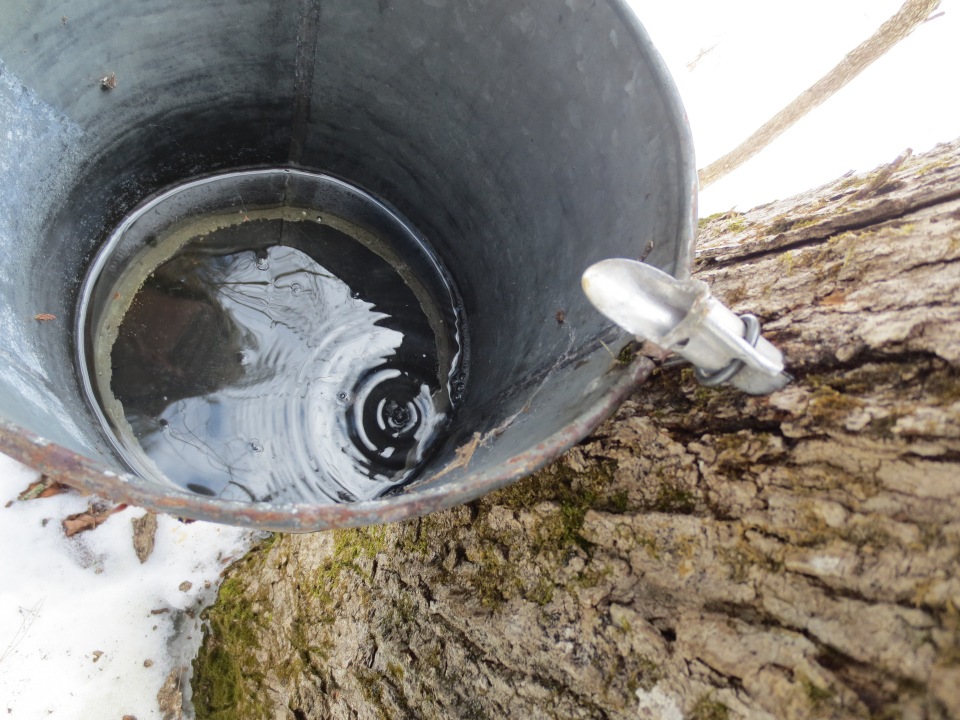 The best part of this last year has been having the opportunity to be more connected to nature.  Seeing the river change from a frozen block of ice to a super flowing stream. Being in tune to the phases of the moon and looking up at the sky at night, seeing stars and planets illuminating the sky. Hearing the birds chirping their first songs of spring, and watching the seasons shift and change…..I could go on and on.

Being able to take part in “Sugaring,” collecting maple sap and processing it into syrup has been another way to connect with the natural world. Checking on the trees each day has been an opportunity to track the change of seasons and be part of something fun and exciting with others. I’ve felt like a child during this process, learning something completely new with wonder and awe.  I feel so lucky to have been here for this!

When we started sugaring we had to wade through 3 feet of snow on the ground. Now the snow has melted, streams are running, the landscape has completely changed, and the trees are surprisingly still dripping. Sugaring season is almost over, but just last night we boiled down the second batch of syrup. And so it continues, until it ends of course.

We spent a day tapping all of the maple trees. We used a hand drill and then hammered the taps in and hung all the buckets. The next day, many of us adopted trees.This is Lady Tree, one of my adopted sugaring trees.

This is Francine. Max named her and I liked it. I would spend the next two weeks with Lady Tree and Francine, collecting sap daily. When we started collecting there was up to 3 feet of snow on the ground. 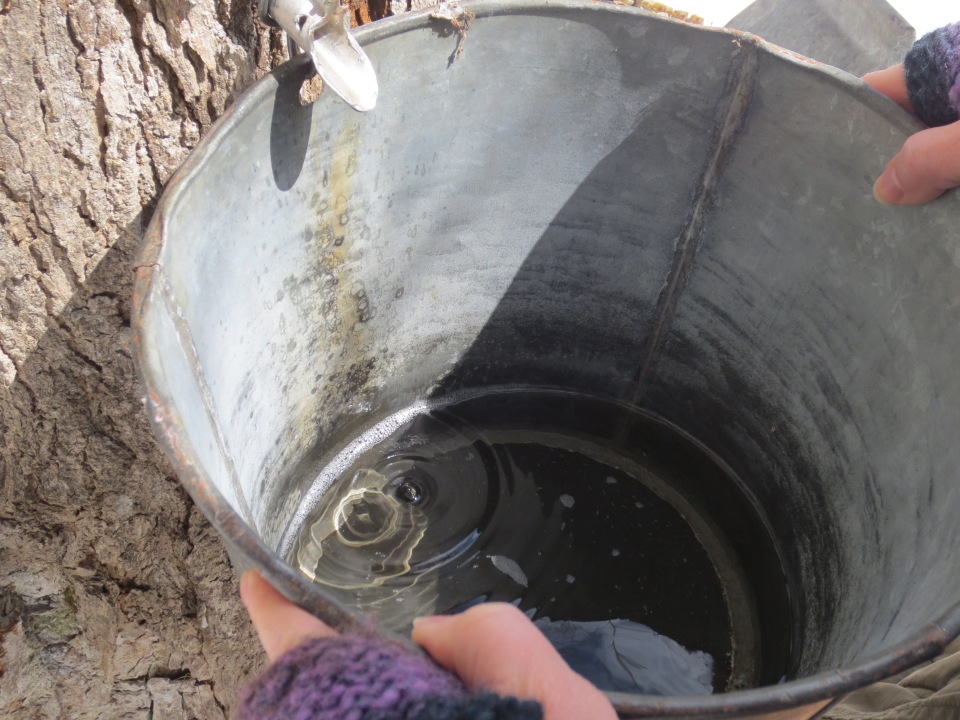 Some days there would be more sap to collect than others. Generally the amount of sap the tree produces has to do with weather conditions. Good temperatures for sugaring is 40’s in the days and 20’s in the nights.

We would collect from our trees daily into these buckets and then bring them down the hill.

Once all the buckets were collected, they would be put in a big garbage pale and brought down by truck to the Patneaude shed-soon to be Sugar Shack, for the boiling process.

The sap would be poured through this strainer, and then into the container below which would filter down into the arch for boiling, 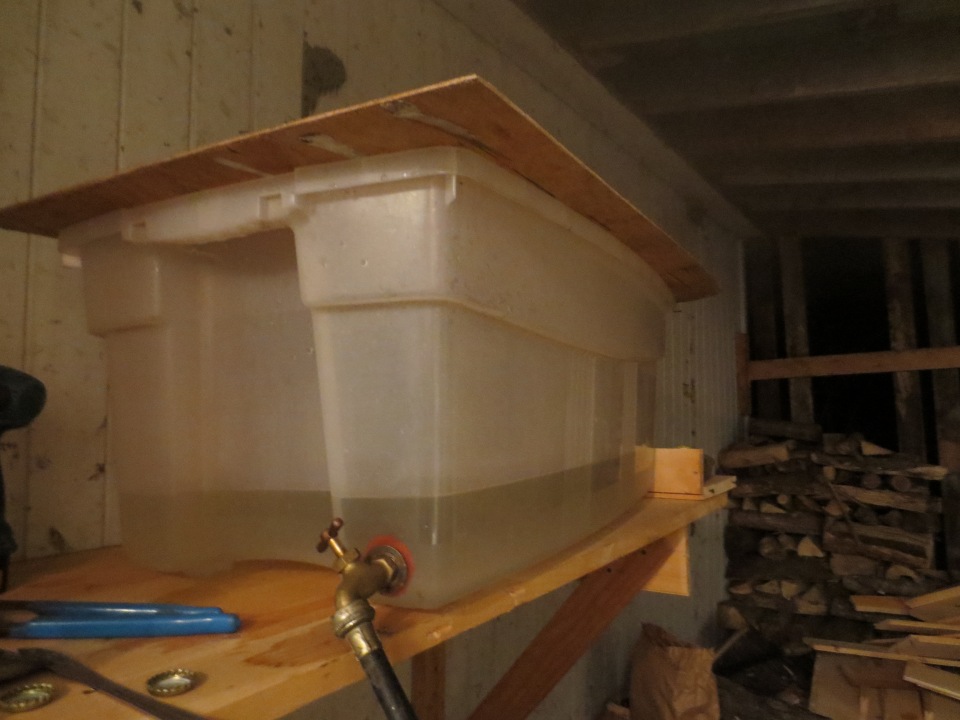 We would stand around and watch sap boil for hours. It’s kind of like watching a fire. The arch would be going almost every night that sap was collected. Someone has to watch the fire. 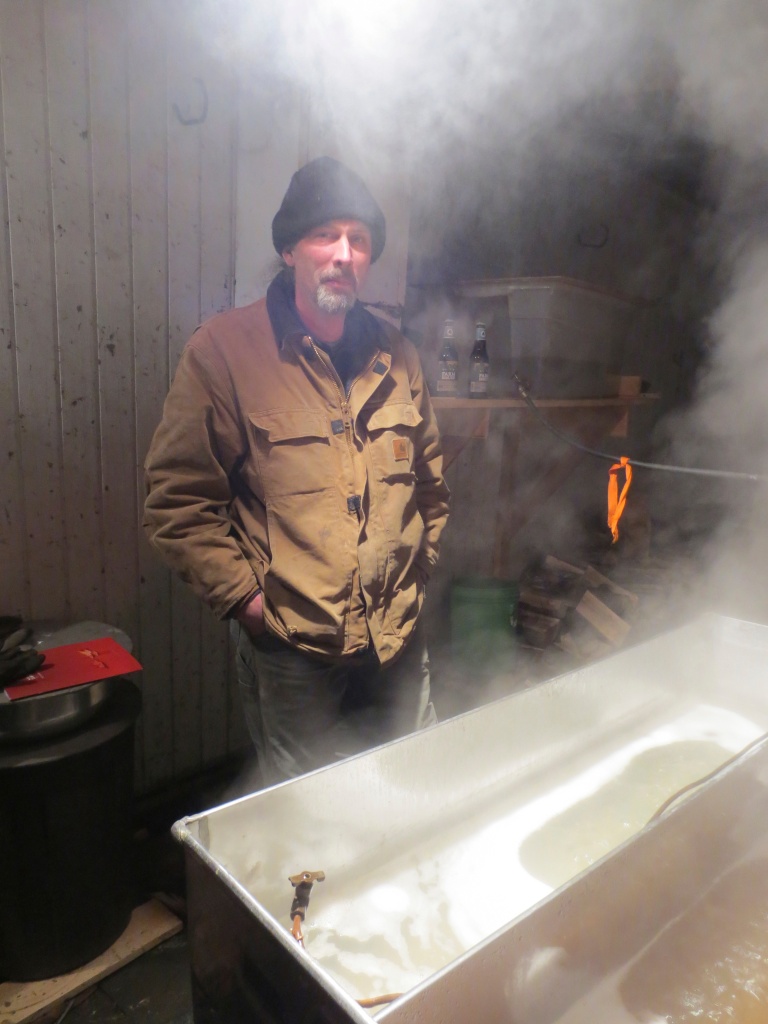 This is Jason. He is responsible for bringing all of the materials and experience for sugaring. He was the one who put in solid hours feeding the fire and watching the sap boil. 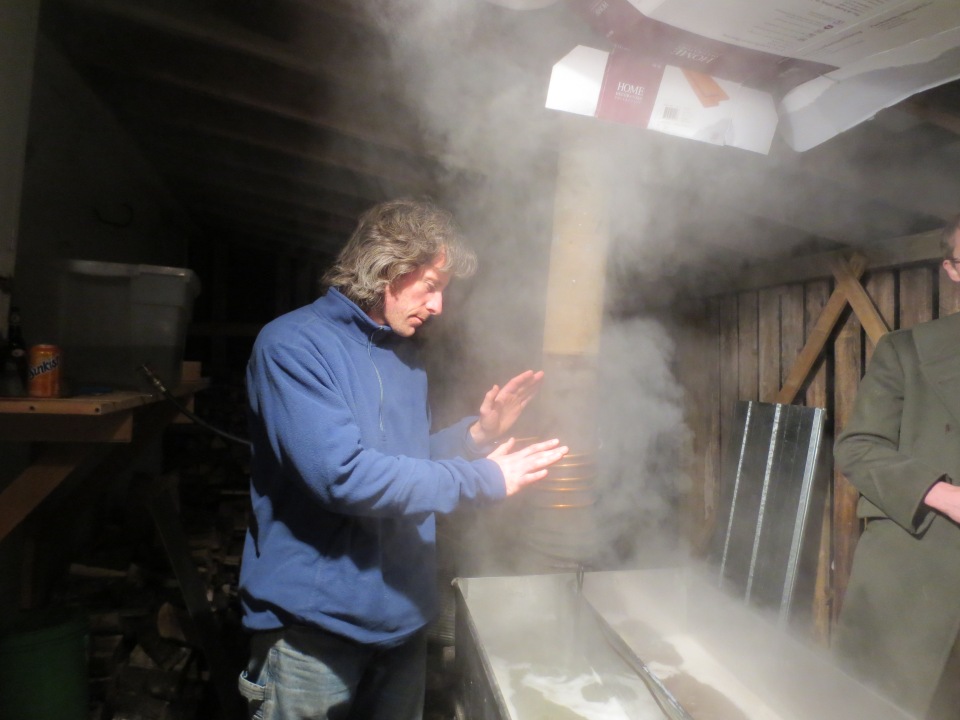 This is Aaron. He’s responsible for bringing sugaring to Karme Choling and coordinating the whole process. He also logged in solid hours of watching sap boil.

The whole point of the arch is to boil down the sap into syrup, so there was always tons of steam.

This is boiled off foam, it has toxins and things that you don’t want in your syrup. 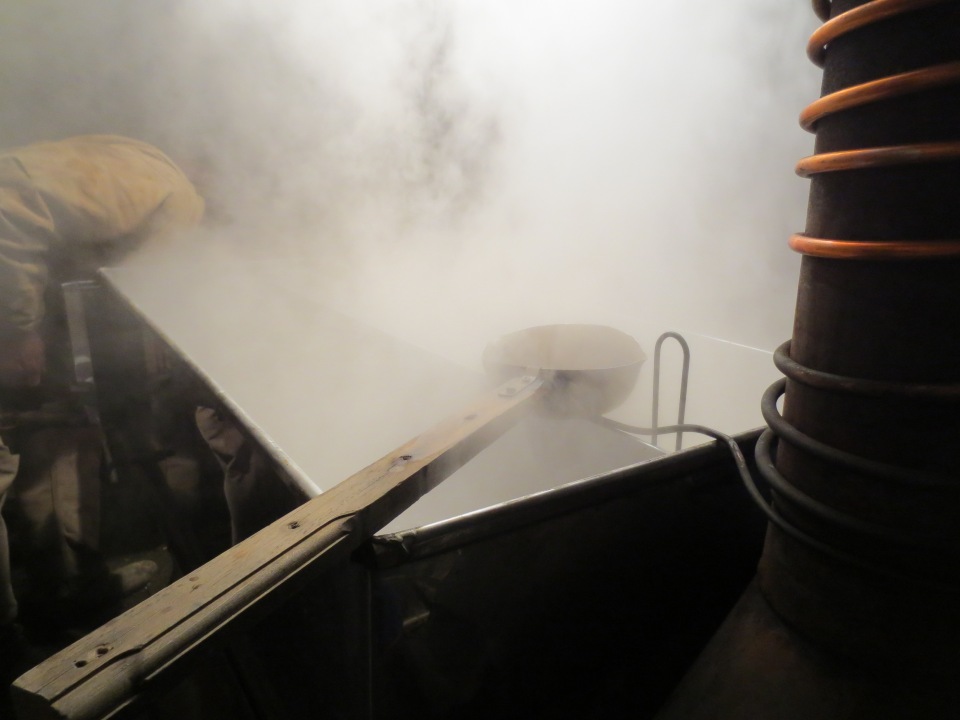 I forget what this spoon was for. Maybe to check sugar levels from the arch. 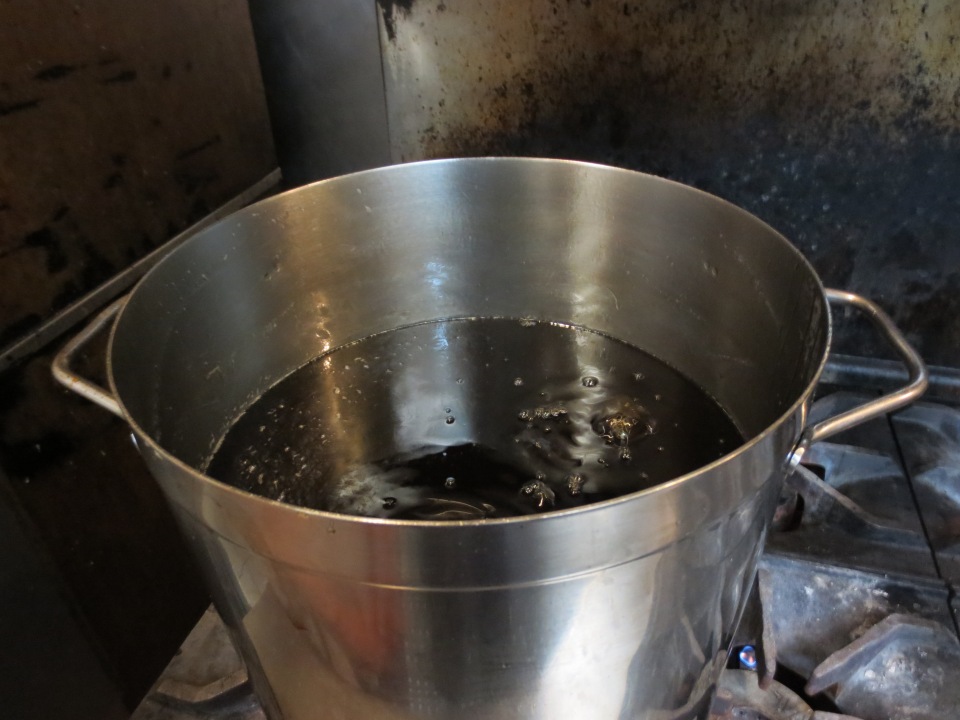 Once the sap has been boiled down enough, it is brought up to the house to finish it off. We started with approximately 50 gallons of sap and ended with 4 gallons of syrup for the first run. Those numbers could be completely wrong, but you get the idea. A lot of sap, a little syrup. That’s why maple syrup is so expensive! 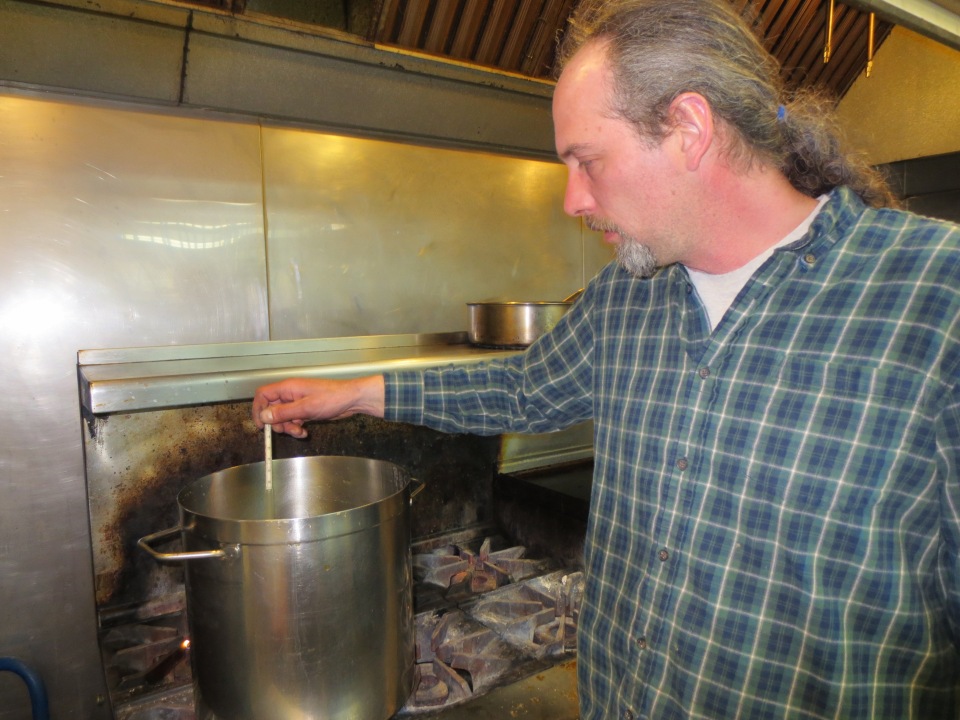 Testing the syrup with a hydrometer, we are looking for a reading of 32. 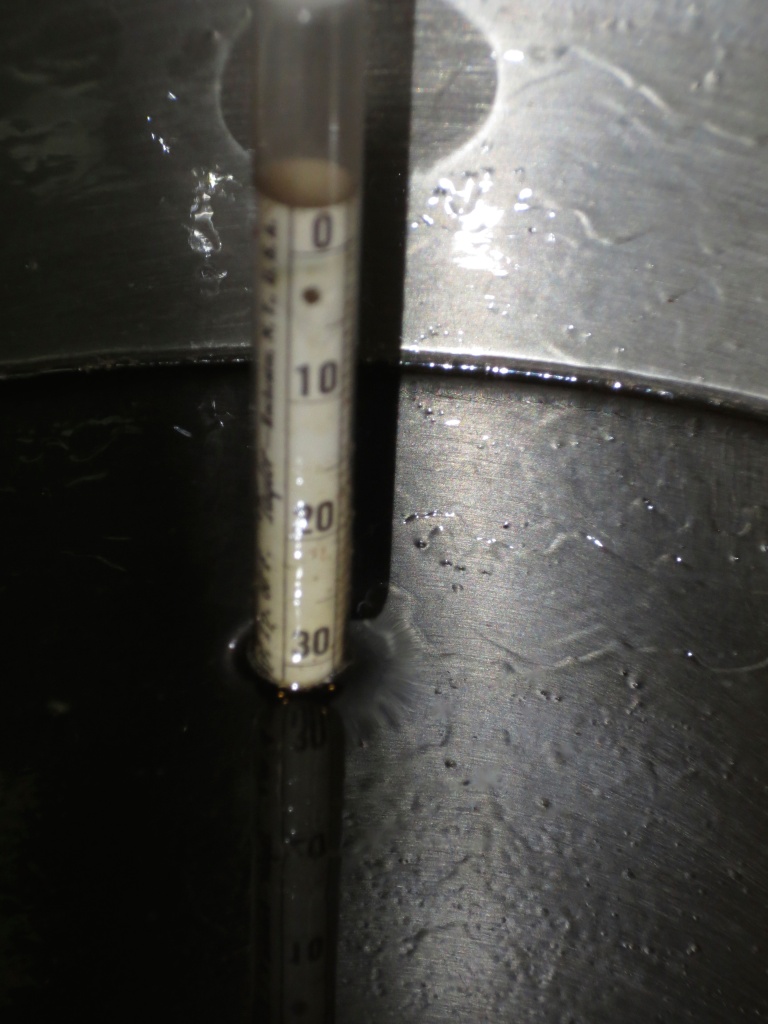 Big moment! We are ready to roll. I was beyond excited. Throughout the whole process and especially at this point. 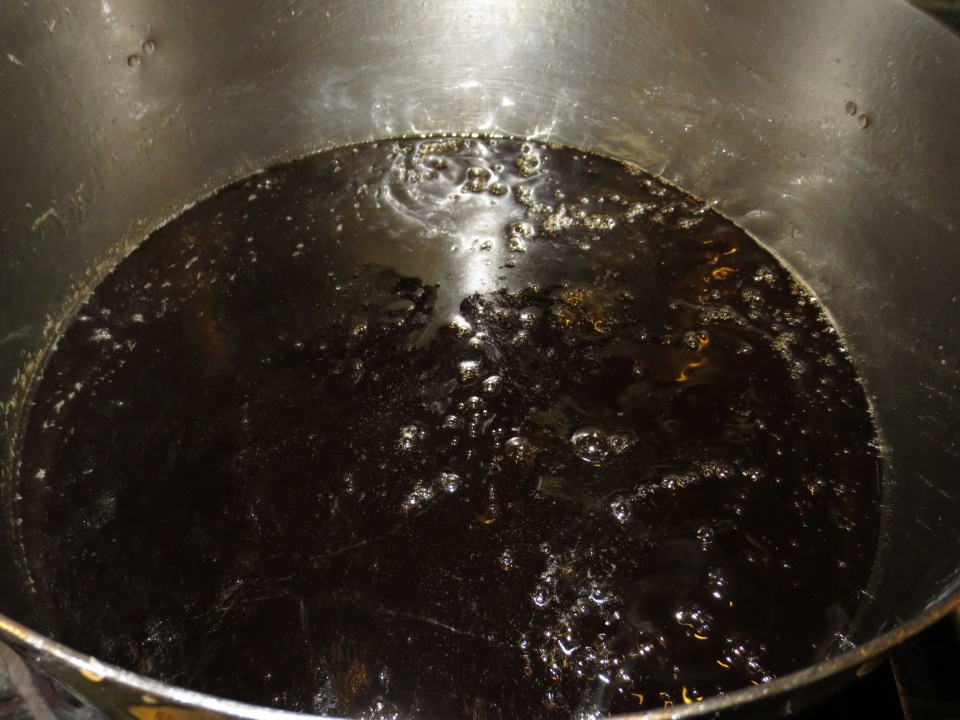 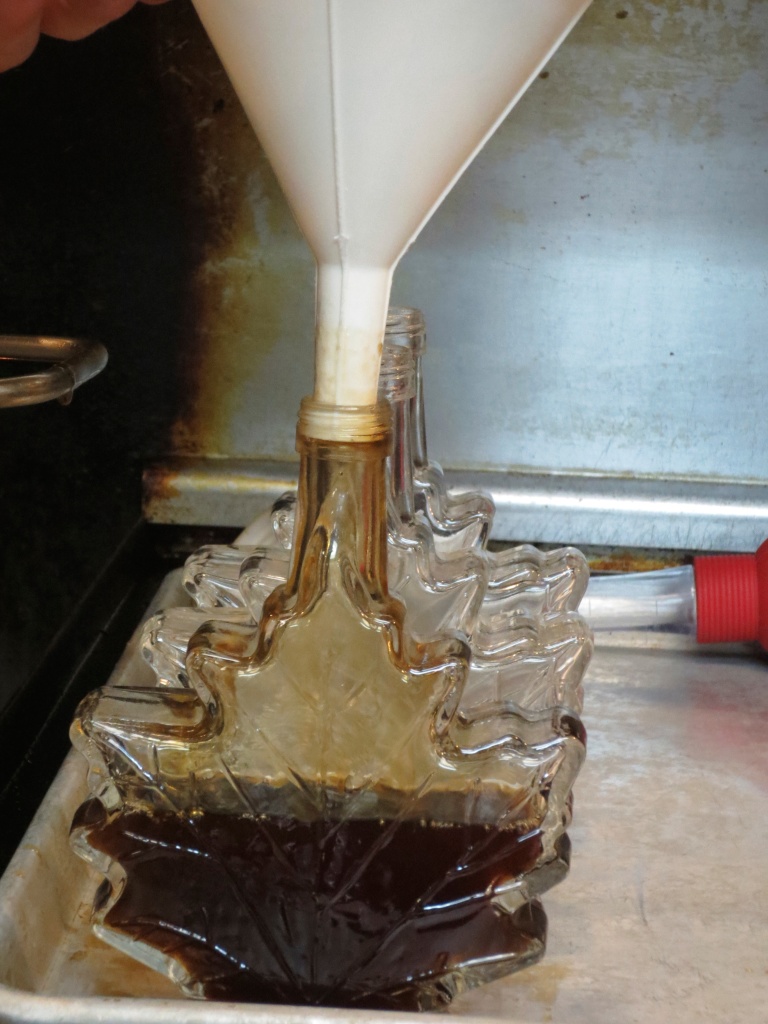 After our first run, we thought the season was just about over since the weather was warming and the conditions were no longer ideal for sugaring. We had a few days where the trees didn’t produce much, but then they started up again. As long as there has been sap, we have been collecting.

We are now on the second run.  Look at how the landscape has changed! All the snow is gone and it officially feels like spring. 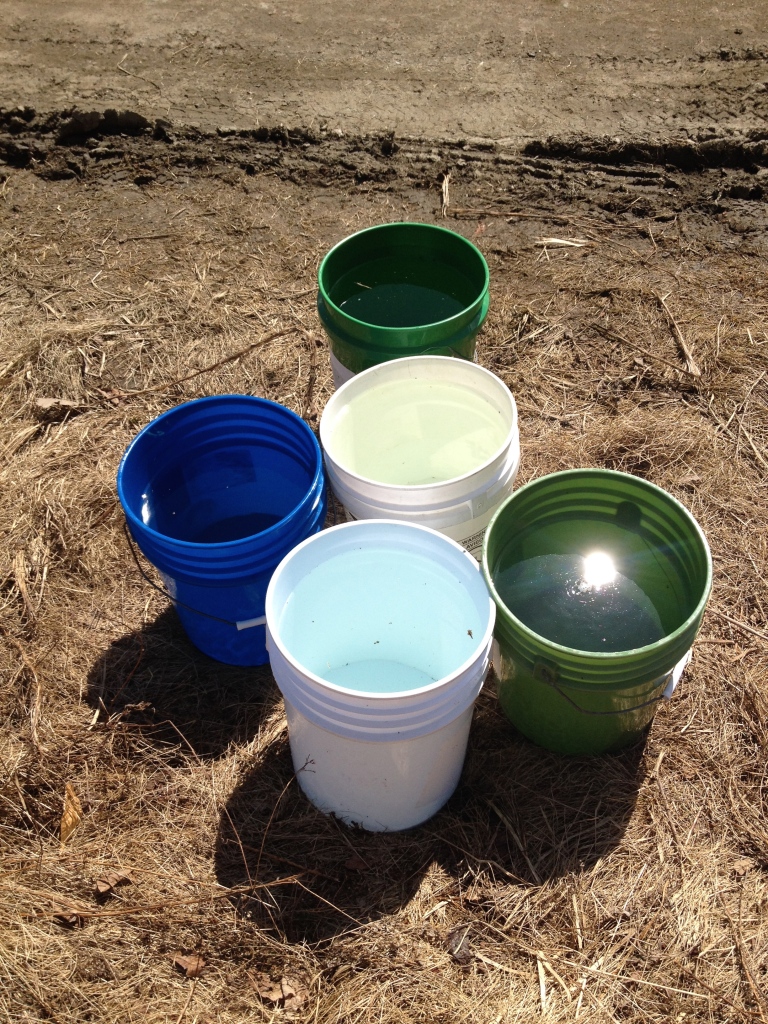 But the trees have still been producing. Once the sap turns yellow, it’s no longer good for syrup. It’s hard to tell here, but some of the buckets have clear sap and some we have collected was more yellow, which incidentally tasted a lot sweeter.

Here’s Francine in the Springtime. 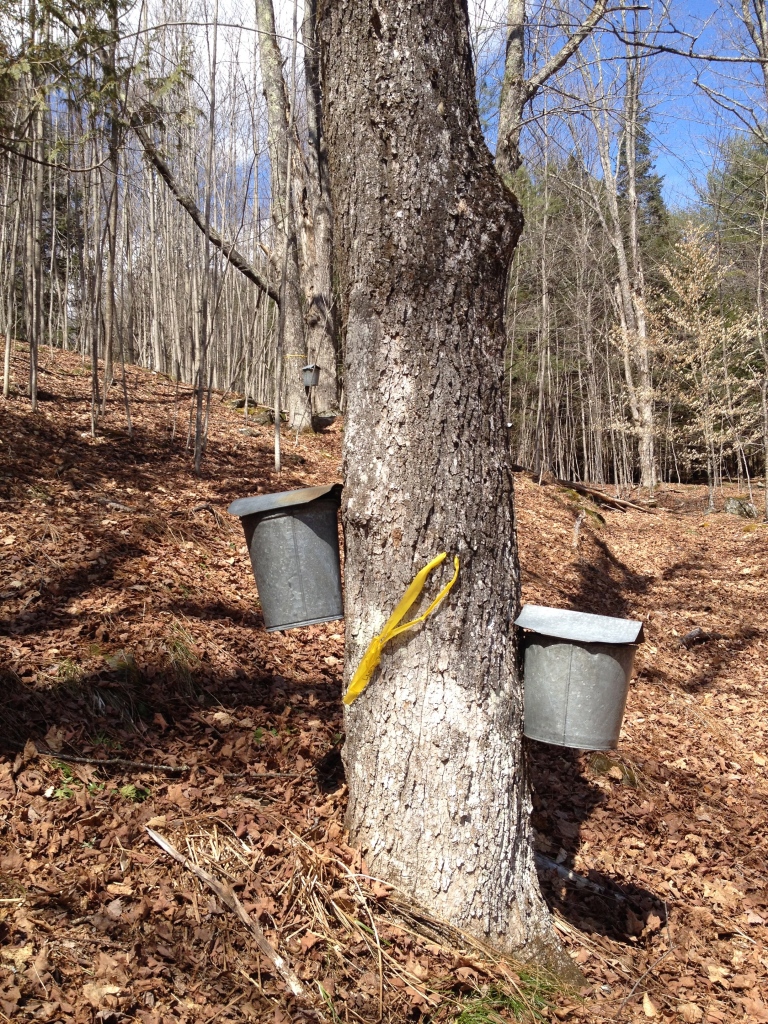 These are all the buckets that we collect each day.

It’s hard to believe that just 10 days ago, this whole area was covered in snow.

We’re not in California anymore Toto!